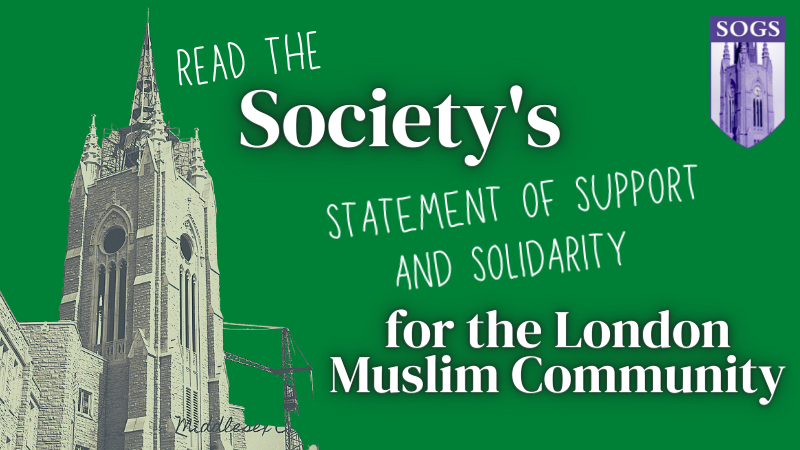 We grieve and condemn the recent Islamophobic terrorist attack against a Pakistani Muslim family in London on Sunday, June 6th. The attack took the lives of four members of our community, spanning three generations of a family. The sole survivor is the family’s nine-year-old son, who is severely injured. This horrific attack has been designated as a preplanned and premeditated hate crime by local law enforcement. To everyone impacted by this heartless attack, please know that we grieve with you, and that the Society stands in solidarity with our Muslim community.

This recent attack reinforces and highlights a shameful history of racism in London. It is time to acknowledge that Islamophobia is a deplorable part of our present and past. We cannot afford to continue to ignore the real impacts of racism in our own communities; we cannot hide behind the guise that things are “better” in Canada. We must take action to be anti-racist and combat the racist ideologies that have resulted from longstanding systemic efforts. We further acknowledge that one of the victims was a member of the Western graduate student community in the department of Civil and Environmental Engineering. Their connection to Western emphasizes that our community is not immune to racism. Many of our members experience racism both in academia, at Western University, and in our London community on a daily basis. We must all take action to dismantle systemic racism to ensure that everyone can walk safely and confidently through our communities.

Islamophobia overlaps with other forms of hatred and discrimination, from anti-Black and anti-Asian racism to gender-based violence. White supremacy is not only pervasive within Western culture as a result of colonialism; it is the very historical foundation of contemporary Canadian society. While Canada is often perceived as a “safe” place for immigrants and diasporic communities, the violence and hatred of white supremacy is baked into our institutions, economic practices, belief systems, and politics. White supremacy is not limited to stereotypical hate groups; it thrives among politicians, journalists, academics, and neighbours. It is only through actively and intentionally dismantling white supremacy as an ideology that we can start to address its violence.  We recognize that, as an institution designed to protect our community members, law enforcement in Canada are often complicit in allowing white supremacist groups to target Canadian Muslims and to operate in our own community.

We agree with the National Council of Canadian Muslims that this is a “terrorist attack on Canadian soil”, and should be treated as such. This includes prosecuting the attacker to the fullest extent of the law, including charges of domestic terrorism and hate crime, first-degree murder. This recent attack is all too reminiscent of attacks such as the Quebec City mosque shooting in 2017 and the Toronto van attack in 2018. As recently as 2016, then Mayor Matt Brown described an Islamophobic attack on a Western student as a “wake up call.” This recent attack is a tragic reminder that we still desperately need to do more.

As leaders we must consistently call out and condemn Islamophobia in all its forms. We call on London politicians and police to develop a safe community for our Muslim neighbours and other minorities, where intercultural and interfaith differences are celebrated and free of discrimination, harassment, and hate. To do this, we ask:

Resources and Actions for Allies

To learn more about Islamophobia in Canada:

Read the statement of support and solidarity (PDF) HERE. 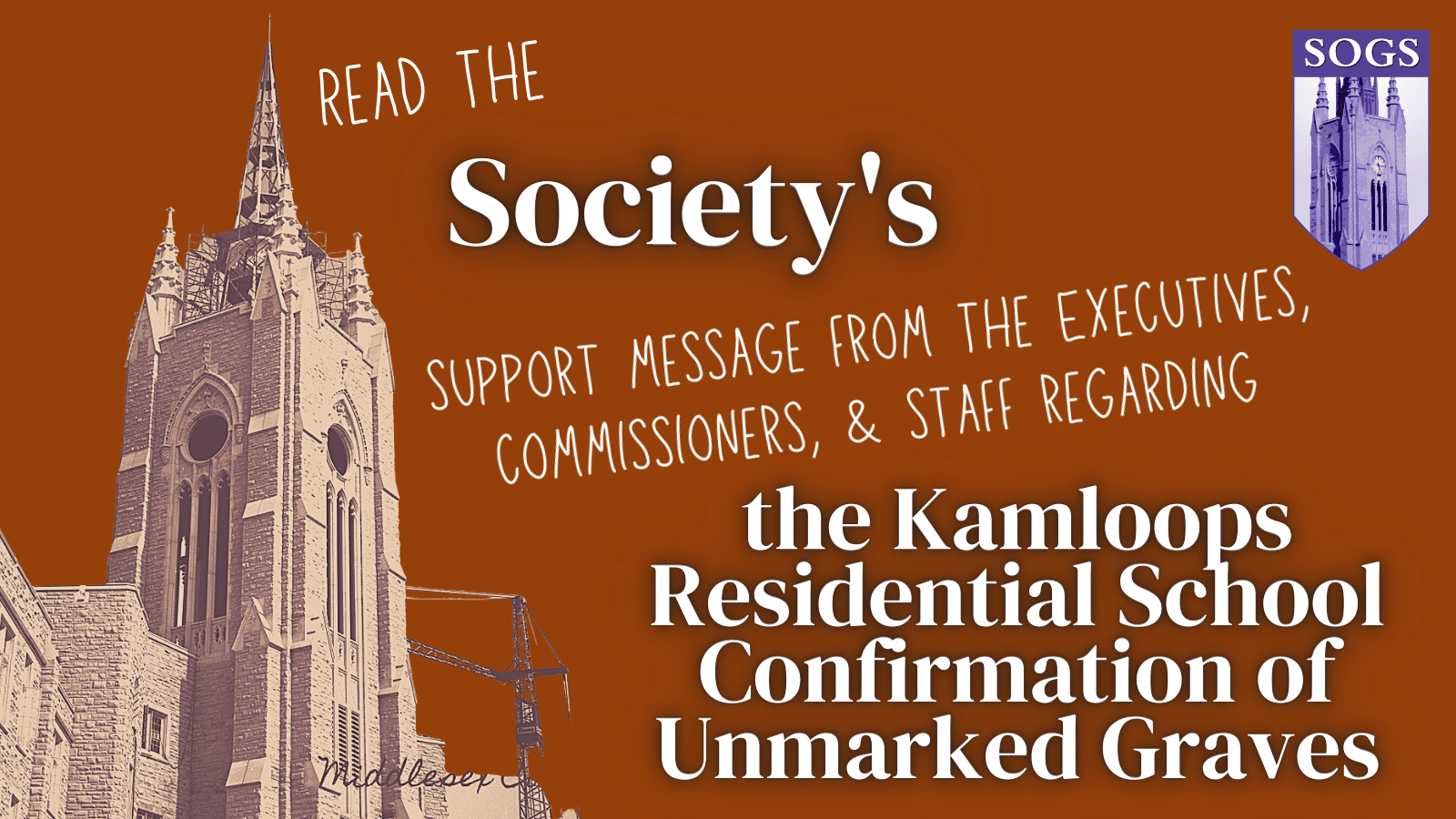 With profound sadness, the Executives, Commissioners, and Staff at the Society of Graduate Students (SOGS) at Western University offer condolences to the Indigenous families and communities impacted by the confirmation of an unmarked mass grave on the grounds of the Kamloops Indian Residential School. The children found were the future of the Tk’emlúps te Secwe̓pemc First Nation as well as other First Nations.  The deaths of these children are a devastating loss for Indigenous families and communities across the lands currently referred to as British Columbia.

We support calls by First Nations communities for the immediate funding of the Truth and Reconciliation Commission (TRC) of Canada Calls to Action Numbers 71-76 regarding missing children and burial information.  The offers of condolences and acknowledgement of the Kamloops Indian Residential School discovery by all levels of Canadian government must match action.  The uncomfortable truth revealed on Thursday May 27th, 2021 is not an isolated incident.  As articulated in the Final Report of the Truth and Reconciliation Commission of Canada Volume 4, Survivors confirm atrocities such as that at Kamloops Indian Residential School took place at many of the Indian Residential Schools.  Locating and identifying the missing children requires immediate action that must be led by the First Nation communities affected.

We join Indigenous nations and communities in calling for the urgent implementation of the 94 Calls to Action put forth by the Truth and Reconciliation Commission of Canada.  The historical and ongoing impacts and processes of colonization, including the Indian Residential School System, continue to discriminate, disadvantage and dispossess Indigenous Peoples.  Reconciliation is a process that requires immediate and sustained action and investment by all levels of Canadian government as well as Canadian citizens.  Canada’s response to the 2015 release of the TRC Calls to Action has been shamefully inadequate and fails to meaningfully address the legacy of Indian Residential Schools.

We join calls from across the lands for the Canadian government to end its legal battle with Indian Residential School survivors and their families.  The $3.2 million spent on legal fees to withhold the truth from St. Anne’s residential school survivors and the Canadian public is one example where the federal government continues to actively diminish and impede reconciliation efforts. The Canadian federal government must immediately release all Indian Residential School documents (unredacted) so that truth and justice can be achieved in the process of reconciliation.

We recognize SOGS has a distinct role to play in advancing reconciliation through Indigenous-specific advocacy and education efforts.  To advance reconciliation, we commit to immediately reviewing SOGS supports to ensure our supports appropriately match the needs of Indigenous graduate students at Western.  We further commit to an internal and ongoing review to examine how SOGS operations and policies can better align with and advance reconciliation efforts at Western and in the surrounding communities.

As allies to Indigenous Peoples and key actors in reconciliation, we will continue to share relevant resources and opportunities for non-Indigenous graduate students to support responses to the Kamloops Indian Residential School tragedy and engage in ongoing reconciliation efforts.

Resources to learn more about Indigenous Peoples, our Shared Histories and Reconciliation:

List of SOGS, Western and Community resources for Indigenous students:

The Society of Graduate Students (SOGS) Declaration of Climate Emergency

Climate change poses an imminent, monumental threat to peoples’ livelihoods both on Western University’s campus and within the greater City of London community. Meanwhile, the ongoing collapse of biodiversity and loss of species here in Canada and abroad risks unprecedented devastation to the natural world. Continued environmental decline will leave behind a poorer, more fragile state of life on our planet for future generations: mass extinction will permanently reduce the capacity of our planet to grow food, to regenerate landscapes and to provide ecosystem services which we, and all other life depend on to survive. Today, it is still possible for humanity to prevent mass extinction by changing our behaviours.

The changes to our planet, being induced by anthropogenic climate crisis and biodiversity loss, disproportionately affect historically oppressed groups, who pay the greatest cost in food insecurity, loss of natural resources, and displacement. Continued inaction by governments and institutions to address the root causes of climate change and biodiversity loss constitutes unacceptable environmental injustice.

In accordance with the United Nations Intergovernmental Panel on Climate Change, Paris Agreement and Production Gap Report, Western University signed the Sustainable Development Goals Accord Global Climate Letter. With their signature, Western pledged to perform the following actions by the year 2025:

For Western University to stay true to their pledge to the SDG Accord, it must strive towards setting and meeting more ambitious sustainability targets.

In the Fall semester of 2020 the SOGS Sustainability Committee sent out a survey to all Western graduate students to collect information about their perceptions of sustainability issues involving SOGS, Western University, and the London community at large. The survey found that 90% of respondents feel anxious about their future because of climate change. Graduate students expressed overwhelming support for Western University to renew its commitment to environmental sustainability, with 90% of responses indicating Western should do more to address climate change and suggesting that Western should increase promotion of its existing sustainability programs on campus. In summary, the majority of SOGS members who completed the survey want Western to recognize climate change as an emergency (see Appendix X).

In keeping with similar efforts led by the Canadian Federation of Students’ Climate Justice and a Liveable Planet Campaign, University of British Columbia’s Climate Emergency Declaration, and

City of London’s Climate Emergency Declaration, the Sustainability Committee is calling on SOGS to demonstrate support for swift and ambitious climate actions within our Society and Western University by endorsing the present declaration that we are in a state of climate emergency.  This declaration is necessary (1) as a direct response to SOGS members’ concerns about climate change, (2) to refocus our institutional leadership’s priorities around the crisis we face, and (3) to stand in solidarity with the 2019 City of London climate emergency declaration. By endorsing this declaration, SOGS will prepare to support efforts on campus and within the community to address unprecedented societal challenges. 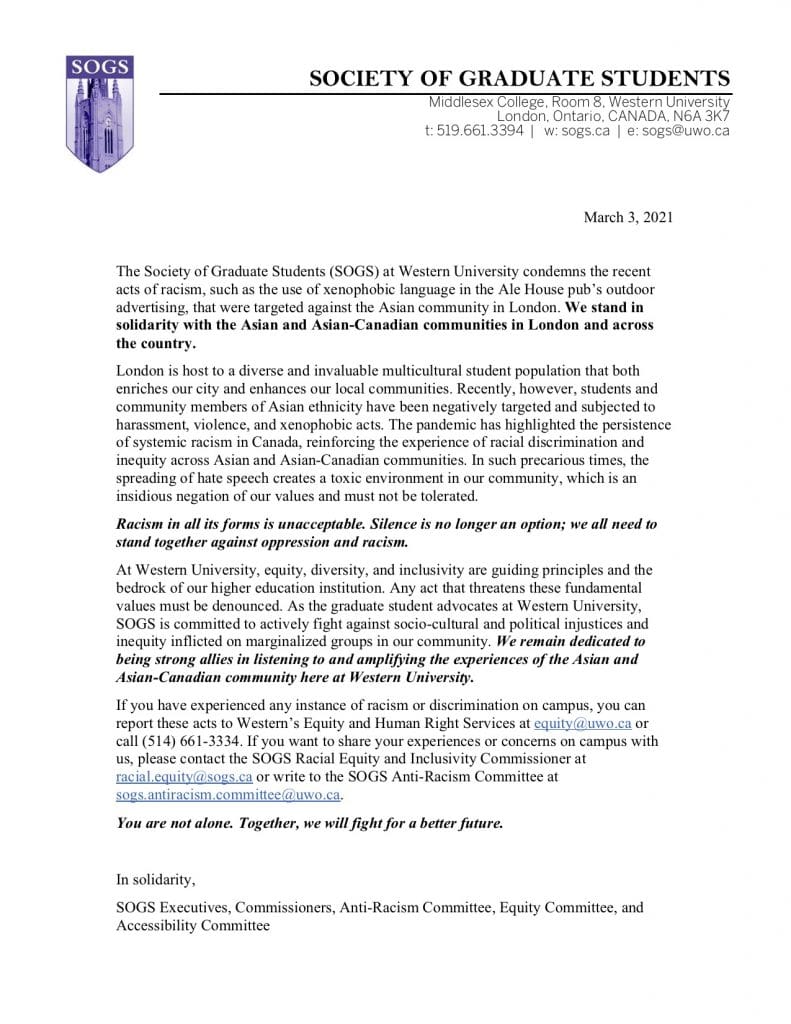 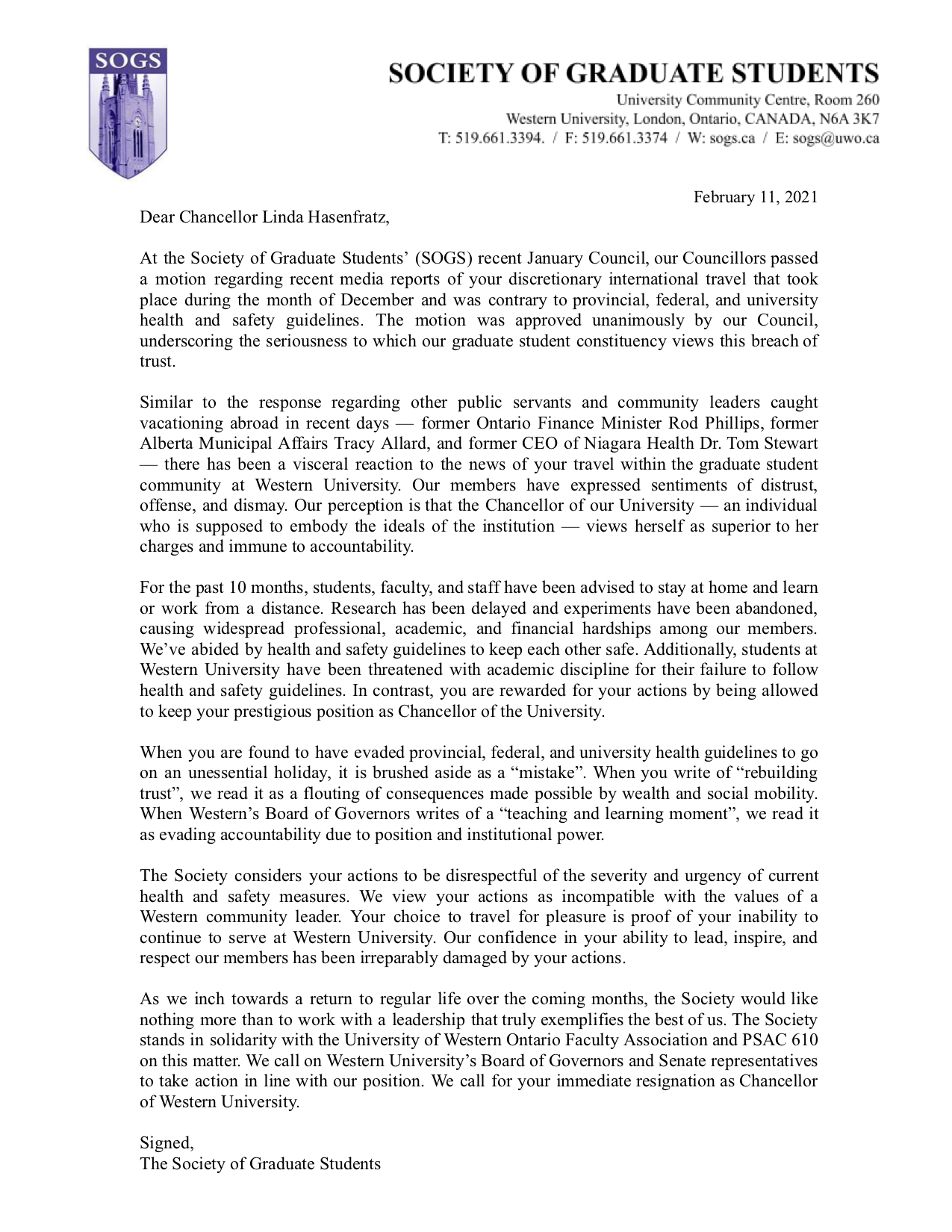 Congratulations to our December 2020 newsletter trivia winners: Shaela Khan and Xi Zhang ****Come to the SOGS office (MC room 8) to pick up your $10 Grad Club gift card once it is safe to due so.

In the December 2020 issue  you will learn about what SOGS was up to last month and meet our new SOGS squad team members. Congratulations to Yousuf Hasan (VP Advocacy), Denise Kamyuka (Racial Equity & Inclusivity Commissioner), and Merna Seliman (Accessibility Commissioner) for winning recent elections at Council in November. We’ve got a ton of call-outs for involvement – conferences, committees, courses, and more! 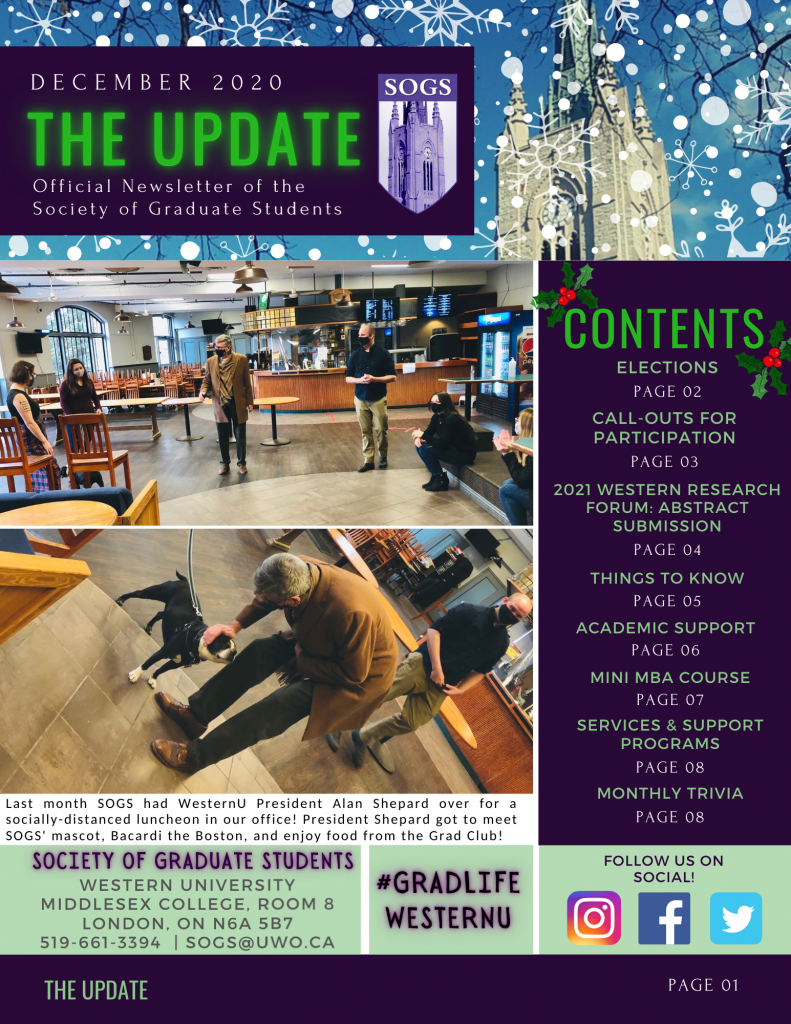